A Private Organisation Since 2000 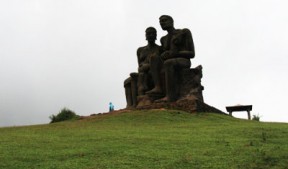 Ramakkalmedu is a hill station and a hamlet in Idukki district in the Indian state of Kerala. It is located about 15 km from Nedumkandam on the Munnar-Thekkady route.

Ramakalmedu stands tall in the western ghats at a height of 3500 feet above sea level. The ecosystem of the area consists largely of grass land Shola forest type which is laced by sporadic bamboo forests.

Constant wind is another factor which makes Ramakkalmedu unique. Wind blows at a speed around 35 km/ hour at Ramakkalmedu throughout the year irrespective of the season and time.Tourism villages like Pushpakandam and Kuruvikanam near Ramakkalmedu is the second place in Kerala where wind energy farm is installed,though it is private holdings. Currently the capacity is at about 12.5 MW.This electricity is distributed to Kerala State Electricity Board.eventhough Ramakkalmedu has potential to produce much electricity,as it is said to be one of Asia’s largest wind blowing area.